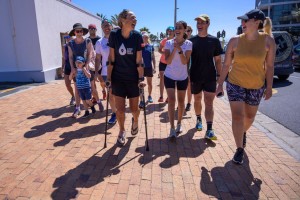 CAPE TOWN, January 07, 2019. Water advocate and ultra-runner Mina Guli committed to run 100 marathons in 100 days around the world to raise awareness about the global water crisis. After doctors discovered a stress fracture to her right femur earlier this month, Mina continued the campaign, walking a further three marathons in South Africa to complete marathon 62. However, the serious injury has worsened and doctors have advised Mina that she rest and take a break from her daily marathons to recover from injury or face permanent damage. Marathon 62 ended in tears with Mina no longer able to put any weight onto her right leg.

After consulting with doctors at the Christian Barnard Memorial Hospital and her international medical team, it was discovered that the 48-year-old now has multiple stress fractures in her right femur. When she shared the news on social media, outpourings of support flooded in, with followers all over the world offering to run a marathon for Mina – to keep #RunningDry going and ensure she completes 100 marathons in 100 days.

“I have broken the largest bone in my body trying to complete the #RunningDry campaign,” says a tearful Mina. “But it has reminded me that the purpose of this campaign is bigger than running and bigger than me. I am devastated that I can’t run right now, but I am completely inspired by the commitment of others who have encouraged me to pass the baton. I cannot create global change on my own: my followers and supporters around the world are helping to make this campaign into a global movement.”

Mina was met at the hospital by friend and mentor, Lewis Pugh, who advised Mina not to jeopardise the next 38 years of campaigning for the global water crisis for the next 38 days of this campaign. “If Mina continued she would do permanent damage to herself, so she has agreed to allow all of us – her followers and friends – to step in and help her run the remaining marathons whilst she recuperates and focuses her energy on meeting water heroes in places already affected by the water crisis.”

In a true reflection of how the global community needs to work together to solve the world’s water problems, Mina’s friends, family and supporters have rallied around her to “donate” their kilometres for #RunningDry to continue while Mina recuperates. There have even been calls by running groups to start a global #RunningDry marathon day where people from all over the world are encouraged to walk or run for Mina.

“I have been so humbled by the support,” she explains. “Without them and their incredible offers to run for me, I never would have been able to make this very tough decision to let my body heal. I’d like to take this opportunity to thank everyone who has sent a message or offered to run or walk for water – your support means everything to me. I will do whatever it takes to get back on my feet and run. I want to make saving water so famous that it’s not just the right thing to do, but the ONLY thing to do!”

Less than 36 hours after announcing her injury on social media, Mina’s supporters from all over the world – France, India, Australia, South Africa, Israel, Germany – logged a distance of more than 3 marathons on Sunday, January 6, with one supporter, Bruno Sanchez-Andrade Nuno, completing a full marathon distance in Spain. Children as young as 4 years also joined in the excitement, with 11-year-old Jack from Virginia, USA, running an impressive 3km on his own to donate to Mina.

For each day that Mina recovers, 42.2 km need to be logged by the global community of water savers. Those interested in running and walking as part of the #RunningDry campaign are asked to take a photo and share it on their social media channel/s, including the distance and the hashtag #RunningDry so it can be tracked.

Mina will continue on her planned journey around the world while her leg heals, meeting with individuals affected by the water crisis and water heroes making a tangible difference in their countries. She has vowed that she will lace up her shoes again in order to finish the #RunningDry campaign in the allotted 100 days on 11 February 2019.