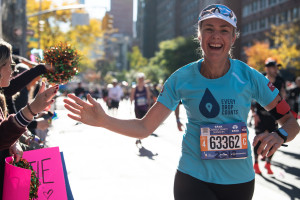 At yesterday’s New York Marathon, water advocate and ultra-runner Mina Guli laced up her running shoes to call attention to the global water crisis by starting her mammoth project of running 100 marathons in 100 days for one reason – water. The world is facing a projected 40% shortfall between supply and demand for water by 2030 – just 12 years from now. The #RunningDry campaign will see the former lawyer and investment banker travel around the world while running a marathon a day to tell some of the world’s most pressing water stories as well highlight the everyday heroes working to solve this problem.
#RunningDry launched at the New York City Marathon yesterday, November 4. Over the course of the expedition, Mina will run in England, France, Italy, Uzbekistan and the Aral Sea, India, Hong Kong, China, Dubai, Jordan, Israel, Palestine, Ethiopia, Kenya, South Africa, Australia, Chile, Bolivia, Peru and Mexico, before she completes the expedition by running across the United States to finish her 100th marathon in New York City on February 11, 2019.
“My runs are a call to the world to join together to save water,” explains Mina. “The water we need to live, to survive, is running out. We’re calling this #RunningDry because we need to bring home the severity of the crisis we are facing. It is for this reason that I have chosen to do the unthinkable: running 100 marathons in 100 days around the world to show what a 100% commitment to water looks like. We can all help solve the world’s water crisis. Each one of us is able to make a difference.”
Mina, a 48-year old Australian who is based in Hong Kong, is no stranger to long runs. The #RunningDry Expedition follows the 2016 7 Deserts campaign and the 6 River Run in 2017, which saw Mina complete the equivalent of 40 marathons in 40 days down six of the world’s great rivers. Mina aims to create a global community of water savers and change the way we use and think about water. People can follow her journey on social media where she’ll be documenting the entire expedition.
Throughout her runs, Mina and the #RunningDry team will meet with some of the people most affected by the global water crisis as well as with companies, organizations and people who are innovating to solve it.
“As a society, we hold the power,” says Mina. “With that power we need to encourage companies and governments to make a real change in the way we not only use, but also view our precious and incredibly scarce water supply.”
Human civilization is facing an unprecedented crisis: a projected 40% shortfall in the availability of fresh water by 2030 under current business-as-usual projections of population and economic growth.
“This crisis will unfold in a series of ‘choke point’ locations around the world, created by a confluence of population pressure, irrigation agriculture and climate change,” explains Mina. “If unchecked, it will greatly exacerbate the frequency of famine, population displacement and armed conflict. The World Economic Forum ranks water crises among the top global societal risks in terms of impact.
“The impacts of these choke points will be felt globally through food and commodity supply chains, as well as security threats. Conversely, addressing this crisis head-on presents a major opportunity to promote peace in unstable regions, to manage corporate risk in key commodity supply chains, and avert humanitarian crises.”
To follow Mina’s journey and find out how you can make a real difference in solving our water crisis visit:
Website www.minaguli.com
Facebook @MinaGuliWater
Twitter @MinaGuli
Instagram @minaguli