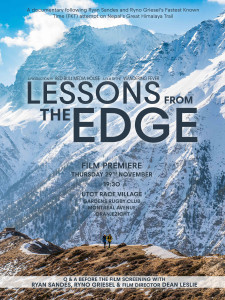 Lessons from the Edge, a film documenting Ryan Sandes and Ryno Griesel’s epic adventures traversing the Great Himalaya Trail (GHT) earlier this year, will be premiering at the Ultra Trail Cape Town opening night on Thursday 29 November 2018. The film, shot by Dean Leslie and Jared Paisley from The Wandering Fever Productions for Red Bull Media House, captures the intricate stories within Ryan and Ryno’s successful 25 day 1500km Fastest Known Time (FKT) on the Great Himalaya Trail
“Looking back on our GHT attempt, it is definitely one of the craziest projects I have attempted, and it was really awesome to have my close friend, Dean Lesley with Jared Paisley, along to document the journey,” says Ryan. “I’m really looking forward to the movie coming out, Dean has spent many months editing and crafting this story, so I am really excited to share it with everyone!”
“Our Lessons from the Edge” project was one wild raw adventure,” exclaims Ryno Griesel. “It turned out a bit crazier and way more dangerous than expected and I am extremely grateful that I could share it with Ryan. It was definitely a life changing journey through massive mountain range and we got to meet amazing Nepali people along the way, but there were some dark times that we had to deal with … we are excited to share this journey of our highs and lows with everyone!”
The film sees Sandes and Griesel traverse heavily snow-covered mountains and experience incredibly extreme weather conditions unusual for that time of year along the way. They suffered frost-bitten fingers, serious tummy bugs, breathing difficulties and a few of near death experiences. A constant on the route, however, was the incredibly welcoming spirit of the Nepalese people who truly embody the spirit of Namaste, and welcomed the both of them into their homes.
“Logistically, this was one of the most complex shoots I have ever done. The simplicity of Ryan and Ryno moving through the Himalayan Mountains on foot was seemingly countered by the chaos behind the scenes,” explains Dean Leslie from The African Attachment. “Going into the project, I hadn’t fully grasped the enormity of the challenge that Ryan and Ryno were undertaking. We faced daily challenges and obstacles as we tried to keep up with Ryan and Ryno and as the attempt progressed the filmmaking slipped into the background as concerns grew around their safety and well-being.”
Lessons from the Edge will premiere on Thursday 29 November at the opening of Ultra Trail Cape Town at Garden’s Rugby Club at 7:30pm and is open to all. It will be launched globally on Red Bull TV and Red Bull’s YouTube Channel on Tuesday 04 December 2018.
For more information please follow Ryan’s social media pages.
ENDS